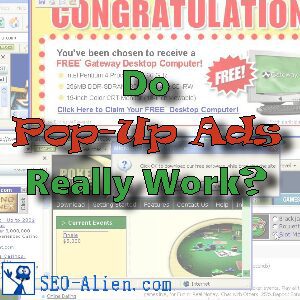 For anyone who has spent anytime online, the chances are pretty darn good that they will visit a website that has a pop-up on it. Pop-ups can be annoying, so do Pop-up Ads on websites really work?

The answer to "do Pop-ups on websites really work?" is going to be one of those 'Yes' and 'No' type answers and I believe most of your success or failure using pop-up ads depends on your pop-up etiquette.

Before I get into pop-up etiquette, let's go over a few things about the dark side of pop-ups.

I think it would be safe to say that Pop-Up Ads could very well be one of, if not thee most hated online features ever invented. The person we can thank for this pop-up annoyance is Ethan Zuckerman, the creator of the Pop-Up Add in the late 1990s.

So, with all that out of my system, now I can say that I think there are a few exceptions where pop-ups do work. When pop-ups are used with and for creative reasons (and not the norm), pop-ups can be effective.

I will do my best here to explain why I believe pop-ups don't work and when and why pop-ups work.

The Why Do's and Why Do Not's Behind "Do Pop-Ups Really Work?"

Why and When Pop-Up's Do Not Work

One of the biggest problems with Pop-Ups is they have a horrible reputation to begin with. Pop-up ads are notorious for fake close buttons, URL redirection, background URL redirection, Pop-ups that simply won't go away and a slew of other reasons.

"As a website owner, you have to decide whether the benefit you get from pop-ups is worth the possible risk of harming the relationship with your readers."- Beth Hayden

Another one of the biggest reasons we hate pop-ups is they throw some marketing in our face that most likely we are not interested in.

The result of having one of these types of pop-ups on your website can be devastating if you are using a pop-up incorrectly. If your pop-up is not working properly, it can actually interfere with your site’s functionality as well as reducing returning visitors to a screeching halt.

Some pop-ups that aren’t rendering properly can create a huge floating box over your posts and pages that people can’t exit out of — which means they’re going to get intensely frustrated because they’ll need to close their browser completely to get back to what they were doing.

So, what is incorrectly, or better yet, what is the correct time and place to use a pop-up on your website?

Why and When Pop-Up's Do Work - Using Pop-Up Etiquette

The first thing I would suggest you ask yourself before you create a pop-up for your website is, "Is the Pop-up Relative". What I mean by this is does it really belong there. Think about putting a pop-up for a specific reason, to a specific targeted audience.

If you are going to use a pop-up, set it up so it doesn't appear immediately. This will do two things.

If you can, set the pop-up to appear at least 15 seconds (if not longer) after visitor has been on your site.

C) Can your pop-up be easily turned off by the Visitor?

Your pop-up should have an easy way for the user to turn it off so it doesn't appear again, especially if the user clicked the link in the pop-up. Not having the ability to turn it off can send a new visitor on their way to another site fast, and even never come back.

D) Can you set it to appear only a specific page(s)?

I said earlier to make your pop-up targeted to a specific audience and you will get much better results. Having your pop-up so it is blazingly relative to the article/website is must. Doing so will make that pop-up appear relative to the user, thus reducing the chance that you are harming the users experience.

E) Do not use a Pop-up on Mobile

I have played with this a bit, and from doing so I have one suggestion. You do not want a pop-up to appear on mobile phones. So be certain the pop-up you are using has the ability to not appear on mobile.

What is a Good Pop-Up for WordPress?

I have used several pop-ups over many years and I have always stopped using them because they either screwed up my website somehow, or were too cumbersome to use and maintain. Some of the ways a pop-up can mess up your site aren't obvious either. (For example, one pop up plugin I used blocked Google Analytics from tracking my website data.) Regardless of what the issue was, I stopped using them completely.

Then several weeks ago I came across WordPress PopUp. This is one of the better (if not best) pop-up plugins I have come across. This has everything you need and more so you can correctly use pop-up etiquette.

So there ya have it, my tips on using pop-ups. Ultimately, as a website owner, when it comes to pop-ups, their is a decision to make; to use a pop-up or not to use a pop-up. If you choose to use a pop-up, use some pop-up etiquette and you may find them beneficial.

Have anything to offer about pop-ups? I would love to hear anyone's good or bad experiences about using pop-ups.