If you are using a WordPress blog, you might be amazed at how many attempts from hackers there are to try to login to your blog. Stop 'em dead in their tracks with the Limit Login Attempts Plugin.

By default WordPress does not limit login attempts. This is not a good thing. Hackers are using a very common hacking technique called Brute Force Attack to break into sites.

With Brute Force Attack, a hacker runs an automated bot that will keep hammering your blog with up to several hundred, or also thousands, of hits hourly, trying to decipher your login code. If you don’t control those attempts, they will keep at it until finally they succeed and gain access to the backend of your site. Once in, they now have the liberty to do whatever damage they like.

The second is to limit login attempts. If they fail after 2 or 3 login attempts (you can limit the login attempts manually in the settings) they will be "locked out" of your site and will no longer be able to try to gain access.

The most commonly used plugin for WordPress that will limit the login attempts is the "Limit Login Attempts" plugin. The plugin limits the number of login attempts allowed, both through regular logins and the usage of special cookies. After that it blocks the offending internet IP addresses from making further attempts to login. This effectively ceases all attempts at making a Brute Force attack in your site. 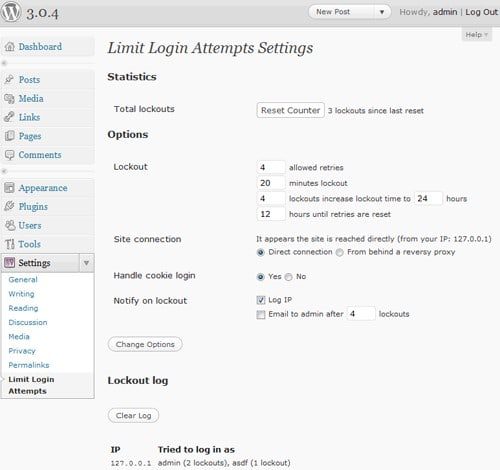 It only takes a few minutes and you’ll be able to Stop Hackers in their tracks! Download and install the "Limit Login Attempts" plugin for WordPress now!