What's Your Author Rank and Should You Care?

Perhaps Google Authorship has no "SEO" or "Social Media" ranking value today, but what is the future of Author Rank and why should you care? 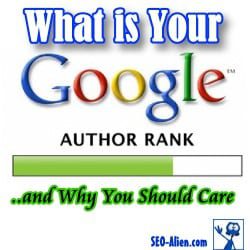 If you are an online marketer, perhaps it's time to look a little deeper into Google's Author Rank. Why should you start paying attention?

Remember several years ago during the "Social Media Explosion" when sites like Twitter and Facebook became the talk of the town. So called "SEO Specialists" were claiming that Google and other Search Engines were not putting any value in "Shares" and "Likes"... well, we all know today that the amount of likes and shares is a major influencing factor, simply because of the backlinks and traffic that you gain from people sharing and liking. Even if Social Media likes and shares is not a direct factor, indirectly I believe it has to be.

When Google introduced the Google Authorship (rel=author) program in 2011, Matt Cutts and Othar Hansson of Google made a video explaining Authorship markup and its possible benefits. At 1 minute into that video, Matt asks Othar whether webmasters using rel=author can expect to get a rankings boost by using it. Othar responds, “It’s obviously early days [of this feature], and we hope to use this information and really any information as a ranking signal.” He goes on to say that they want to gather information on the credibility of authors from this and many other sources, and “eventually” use that as a ranking signal. “We’re only experimenting with that now,” he adds, “and who knows where it will go?”

In November, 2011 I wrote an article titled "What is Your Social Media Influence" and I think today this means more than it ever has when it comes to your overall Online Reputation and has a direct influence to your Author Rank. It is not about how many followers you have, it is more about what followers you have, who you are following, who is sharing and liking your posts and where they are shared.

In other words, is your sphere of who you are following a direct reflection of your online reputation in Google's eyes? I believe the answer is yes, absolutely, (but I could be wrong).

One of the major reasons for this post on Author Rank was reading a Google+ thread from Mark Traphagen regarding Circle Shares, and in that thread the discussion changed towards the topic of Google Authorship. To me, the whole thing about Circle Shares is what Circles you share and what circles you add yourself to. This must be a direct reflection to your overall Social Media Influence.

Who you follow and their "online reputations" has got to be an influencing factor to your online reputation in Google's algorithms. You can think what you want, but the fact that Google has created Google Authorship and has continued to improve it to me is an indication that Google is secretly using it as a scoring factor somehow.

What is Your Author Rank?

Reading that post I linked to above from Mark Traphagen I discovered a tool that you can use to check your Author Rank and I was happy to see that mine was pretty good in comparison to some.

Even if Google is not using Author Rank in any of their Search Engine Algorithms, if nothing else, it is a pretty good tool to see where you stand regarding your "Social Media Influence" as far as an author is concerned.

If you see your Author Rank score is low, (by my best guess, if your above 6, you're doing pretty well) the easiest way to increase your Author Rank is to write better content, have more influential followers and comment and post on better sites.