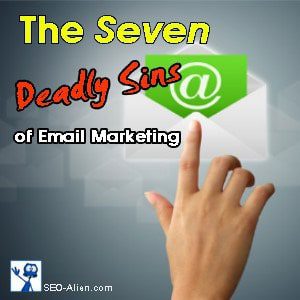 Email marketing is probably the most affordable way for small businesses to get the word out about their services, but many people make mistakes when they're trying to put together a marketing campaign.

Guest post by Karleia Steiner: Content sent in emails can have the power to pull customers in, but it can also repel them. Those who are thinking about starting a new marketing campaign might want to give these sins, courtesy of Progressive Dental Marketing, a thought and make sure they're not committing them before they hit that send button.

There is no greater sin when it comes to email marketing than sending out newsletters to people who didn't sign up. Buying lists from distributors and emailing everyone on them is an excellent way to get ignored. Using a sign-up form to build a list naturally is always the way to go.

This is another deadly sin that makes people think that otherwise legitimate businesses are spam robots. Send out marketing campaigns from an address that has an actual name in it instead of something with a generic do-not-reply address.

Say someone signs up to receive emails from a video game distributor because they love to play games on their PC, and the distributor sends them three newsletters about the hottest new games for cellular phone platforms. They'll start ignoring any future emails because they'll just assume that they're not important to them, even if future ones really did have relevant content.

While no one can guarantee that an email will get opened, they can usually guarantee that people will not open it if they write certain things in the subject line. Make sure that the subject clearly specifies where the email is from and offers something interesting to the potential reader.

5) Using No Real Call to Action

Marketing campaigns are supposed to generate sales, so emails need to have a call to action for the consumer. Don't force the point, but don't be afraid to tell the consumer that they should look into a particular product or service either.

6) Writing Without a Purpose

Many people start up a marketing program, and then they realize that they never had a real plan to begin with. They never thought about what goals they were trying to achieve. Some people want to educate their readers, others want to inform them of industry news and others might want to start a dialogue that ends with a sale. Make sure there's a clear purpose before starting out.

While it might not be as serious of a sin as some of the others, marketers need to pay close attention to how many of their emails get sent back. Email addresses eventually change or close, and when this happens lists fall out of date. Businesses who find that they're getting a large number of bounced emails may not be doing enough to make sure that their list is up-to-date.

Email marketing campaigns take time to build, but some newsletters are popular enough that people go out of their way to sign up for them. Running a clean campaign is a great way to attract new clients, so make sure to avoid these seven deadly digital sins. Eventually those emails will start returning real results.