Whether or not social media is effective for a business depends entirely on what the goals are of that business and how much time and resources they are willing to use up. 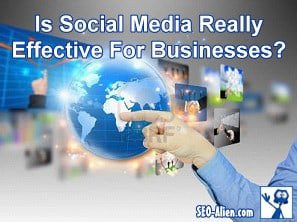 We are going to take a look at a few major things that you will have to encounter when running a social media campaign. If your business could easily handle these, then you shouldn't have a problem and could probably see some good results from it.

A major part of social media is getting more visible and boosting your brand to get a better public image. While these sites can really help you in this aspect, they can also hurt you if your business does something wrong.

So if you plan to get involved with social media, you have to keep an eye on everything that is posted, said, or even implied, because if you do the wrong thing, people could easily tear your brand apart.

A good example of this happening to a business would be when people started to post stories about McDonald's and used the hash tag "McDStories". Although McDonald's is a very large company that was able to counter act this large scale social media disaster, we can all learn from it.

When it just started, people were just posting stories about what bad experiences they had at McDonald's, then once more and more people caught on, they started using the hash tag. After that, anyone who wanted to look up these stories just had to type in that hash tag and they would all come up. So more and more people got involved until it became a massive deal.

Imagine if you ended up posting something inappropriate or your audience took something the wrong way. They would share it with everyone they know and then make your company look even worse. So just make sure to double check every single thing that you post to ensure that you are helping your brand, not hurting it.

Another thing you should understand is that you are going to have to deal with a lot of things within the campaign, which means that each day you will be required to spend an extended amount of time keeping up.

Unless you are hiring a team of people for your social media campaign, you should be prepared to be creating content, posting stuff on a regular basis, keeping in touch with your audience, attracting new audiences, networking within your niche, search engine optimization, and plenty more.

Large successful campaigns can have a team of 5 or more people working full time, so make sure that you don't end up burning yourself out.

If you have to do it yourself, a good solution would be to only pick one or two social media sites that would benefit you the most. By picking and choosing the right sites, you won't be overloading yourself with work and your campaign will be more effective.

So many people hear about the crazy success stories that other businesses have had by getting something to go viral, but when they actually start their social media campaign, they end up realizing that it isn't that easy. Then after a few weeks, they end up just giving up.

Before you start a social media campaign, you have to understand that it is going to take a long time to start seeing the results that you want. It won't happen overnight and you are most likely not going to have something go viral. That isn't to say that it won't happen, but you can't rely on it.

If you are wanting to get involved with social media then you have to be prepared to put in the time and work, or hire some people to do it all for you. Don't start then after a few weeks give up because you haven't seen any results... that is completely normal.

Similar to creating and maintain a blog, a massive part of social media campaigns is to post unique content that will appeal to your target audience. There are plenty of different strategies within social media, but creating content is usually a big part of all of them. So you need to be prepared to create the best content that you possibly can.

It doesn't matter what type, videos, articles, podcast, and anything else you can think of. Coming up with regular content will keep your followers interested and entertained. If you can't keep your followers, they will just eventually stop checking your stuff out.

A popular method throughout a lot of the social media sites is to post relevant images that spark some type of emotional reaction. Either a funny, sad, or even one that makes people angry image can do wonders for attracting new people. They see the image, have a reaction, then are interested in seeing or learning more. If you are a business that can use this technique, then you should definitely give it a shot.

So again, when you are asking yourself if social media is worth it, it completely all depends on your business and what kind of results you are looking for. In the end, a properly maintained campaign can result in much more traffic, a better public image, increased conversion rates, more revenue, higher rankings, and also a much higher authority.

So if you are looking to achieve all of those things and are willing to work for it, then you could say that social media is truly effective for your business.

On the other hand, if you are looking for a quick way to get some more sales or don't have enough time or resources to properly manage a social media campaign, then you may want to try other marketing methods for your situation.